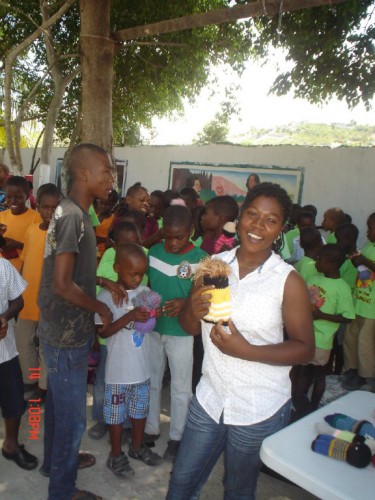 They came from all over the US and Canada – 24 states and the District of Columbia – to this island nation in the Caribbean Sea. Several of these good folks have been trekking to Haiti for as many as 30 years. They came for a conference, The Haiti Connection, sponsored by the Episcopal Church every two years. This year, the first return of the conference to Port au Prince since the 2010 earthquake, some 150 participants from the US, plus 70 from the Diocese of Haiti, met at the Hotel Montana.

This hotel, rebuilt after it collapsed killing 300 people in the earthquake is now called the Suites Horizon/Montana. The meetings were all at the Montana but participants occupied a total of four hotels in Port au Prince with transportation provided. Providing transportation is essential as the traffic in the city is daunting and walking is difficult and unsafe. Magnificent and proficient drivers handled the congestion with aplomb. Yes, there are traffic lights, but very few. There are stop signs too, but few heed them. Navigating an intersection seems to be a game of chicken. The biggest and boldest win. The first day, our driver followed a police car with sirens blaring, lights flashing, horn honking, to get through the traffic. Brilliant!

Port au Prince is a city of landmarks, not street signs. “Turn right at the Quick Mart.” “Make a left at the cathedral.” However, since the earthquake, many of the landmarks are gone. Now it seems the common sense method of direction is: “When you come to a tent city, turn around. You’re going the wrong way.” “Head downhill into town, uphill out.”

One universal element throughout the city is the presence of barbed wire. Each fence or wall is topped with serious barbed wire. The nicer places sport bougainvilla to mask the wire. Another common sight is trash. People simply drop trash wherever. We didn’t see public trash cans except at the airport. Trash is in the streets, the dried up riverbeds, the gardens. People seem to burn the trash to get rid of it, so there is the acrid smell of burning rubbish and plastic throughout the city.

The conference started with a tour of the downtown Episcopal Diocesan Institutions and the National Museum. Because of Haiti time and traffic congestion everything was compressed by about half. St. Vincent’s School for Handicapped is a treasured haven for 200 boys and girls, men and women with a variety of disabilities: blindness, deafness, crippled, limbless. Jojo Jean Paul, born without legs and arms, is a beautiful artist. He speaks several languages and interprets for the prosthesis department whose workers are deaf mutes. Jojo sports a huge smile and a heart filled with hope. He credits Sister Magareth with pushing him to do more than he had ever thought possible. That is his mission now, to encourage the younger boys and girls of St. Vincent’s to study hard, find their gifts, and go for it!

A visit to the site of the former cathedral was a stunning testimony to the devastation of the earthquake. The rubble has been almost cleared. The Smithsonian Institution had sent experts to sort and preserve what is left of the priceless murals that lined the cathedral walls. Plans are being made and money is being raised to rebuild the Holy Trinity cathedral. But we found ourselves walking about on the flat, cracked foundation of what had been the magnificent cathedral building. Hope has a stiff climb here.

Haiti Episcopal University was heavily damaged by the earthquake but most drastic was the loss of two dozen promising students. A poignant memorial marks the spot where the few remains that could be gathered are buried. Holy ground indeed. The university is working hard to recover. In the center of the campus is the original building, a pink wooden Victorian structure that was not harmed at all by the quake.

Saturday afternoon three of us, Rosemari Sullivan, Arlene Easley, and Mary Gorman, went from the Suites Horizon/Montana atop the flower filled hill, to the reality of Haiti. Our driver, Zo, a huge reliable Haitian with a roomy dependable van, albeit the usual hole in the front windshield, maneuvered the rugged road from Port au Prince to Leogane. We all know distance is measured in miles or kilometers, not time. But this is Haiti travel: an 18 mile trip takes more than two hours due to traffic, crowds, accidents, animals and rotten roads. Venders run alongside the car trying to sell us cold water, soft drinks and trinkets.

Destination for the next few days is the guest house of the Hospital Sainte Croix. Three of us shared a dorm room set for six, with a private bath. The other group there was a medical mission team from Georgia and Minnesota. Two doctors, four nurses, two lawyers who had brought a huge assortment of medical items such as antibiotics, vitamins, malaria and diarrhea meds, toothbrushes, condoms, eyeglasses. They set up packing sessions on the dining table between meals. We measured out tablets and filled labeled plastic bags for distribution at the clinics the team would be running all week. The team would treat about 400 patients of all ages each day, at two locations in rural Haiti. Most patients would arrive by foot, prepared to wait hours to see a doctor. Over the years this team has been coming there is a notable decrease in malnutrition, skin disease, and intestinal worms.

Saturday afternoon several of our Guest House group walked to the local community market for what is known as The English Club. Anyone who wants to practice speaking English, comes there for a couple hours each Saturday. Many of the townspeople cannot read, several have never been to school. This is a chance for them to educate themselves. The leaders, volunteer teachers, divide the group into beginners, intermediate and advanced. Paired with speakers of English, they patiently try to follow our lead: “My name is _____.” “I am from _____.” “I work as a ______.” Of course none of us speak Creole and even French doesn’t work with this crowd. But we all soldiered on and after an hour, proudly were able to introduce each other to the group.

Sunday’s Mass was at Sts. Philippe & Jacques in nearby Gressier. A lively group of beautifully dressed Haitians and a motley American mission crew gathered in the small wooden church. Music provided by keyboard, flute, two guitars, drums, a 15 person choir and two acappella sextets. The service lasted three hours, with six baptisms of infants decked out in the finest of finery. One little guy had a white tux with tails, vest, shirt, tie and shoes.

Our group of three then made a visit to the House of Hope, an orphanage started by Alice Barthole, a Haitian woman in 1997 who took orphaned and abandoned street children into her home. With the help of Episcopal parishes in the US and Canada, Alice purchased land and built girl’s and boys’ dormitories, a classroom building, kitchen, dining hall and chapel. The orphanage housed 145 children before the earthquake. The number of children rose to 200 as more children lost parents in the quake. The girls dorm was damaged in the earthquake but no one was killed or even hurt. The dorm has been rebuilt to Canadian building standards.

We were greeted with a chorus of welcome songs by the children. They lined up with their teachers and serenaded us in Creole. We thanked them in English.

We carried two huge boxes with hundreds of dolls hand knit by Women 4 Women, Knitting 4 Peace. Getting them to Haiti was in itself a challenge. Extra luggage charges, customs inspections, gurneys to tote the boxes, but it was worth every effort. Peace Pals are only about seven inches tall, perfect size for a pocket Each one has its own personality with fuzzy hair and colorful clothing. The Peace Pals found homes with boys and girls in orphanages, hospitals, dormitories, medical clinics and schools.

A parish in Burke, Virginia, sent nearly a hundred sundresses parishioners had made. The girls each picked out a dress and donned them right over their clothes. They also sent softballs, beach balls and balloons.

These beautiful, happy little children held our hands as they proudly showed us their home. Two young men who had graduated from the orphanage and moved on to jobs in the city, returned to have lunch with us and fill us in on their lives.

My overall impression of the country of Haiti is quite contradictory. It is beautiful but astonishingly poor. Rubble is almost everywhere. The people are friendly and helpful but their desperation is palpable. We were warned not to walk around alone, even near the hotel. Zo was as much a bodyguard as a driver. He looked after his three blancos and kept us safe.

Haiti has been and could again be a tourist destination. Like most of the other Carribbean islands, and neighboring Dominican Republic, the climate and the flowers are tropical. Like the flowers, with lots of assistance, Haiti can blossom again. 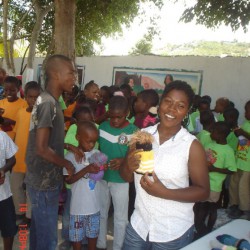 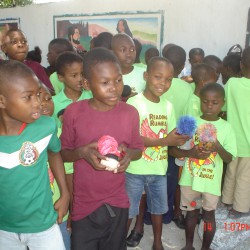 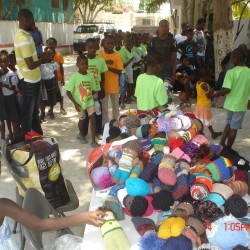 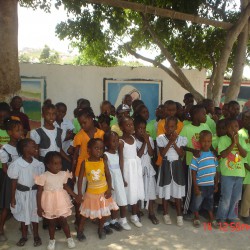 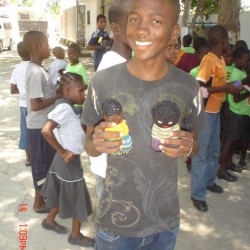 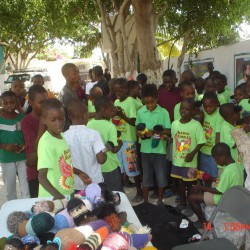 Please include your name and e-mail to receive an acknowledgment of your shipment and a receipt.

Read the most recent newsletter and all of the previous publications on the newsletter archive page.
All NEWSLETTERS